Yesterday's IGN Poll is closed now, and Wing Commander fans definitely had an impact during the latter half of the voting period. When we first noticed that IGN was asking if the general internet population had played the original Wing Commander game, 56% said no. Within a matter of hours of the CIC posting, this dropped to 51%. Not bad. IGN gets a ton of traffic, so any measurable change at all is neat. 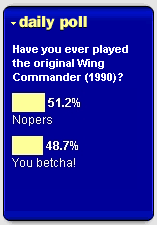 It was actually a little better than this even, but I didn't get a picture.