In the lead-up to Cpl_Hades' 21st birthday Britain's Royal Mail has released a set of stamps to celebrate the CIC staff member's coming of age. The stamps, which went on sale Tuesday -- three weeks before Hades' birthday -- feature photographs taken at Dragon*Con last year. We couldn't be happier for him here at the CIC. The new stamp will also be the first to feature the new 28 pence rate. You can read a more in-depth article on this exciting development at CNN here.

Advance orders have already been taken from collectors and fans. "We are expecting them to be this year's most popular stamps. Our order lines have been extremely busy," a Royal Mail spokesman told the Press Association. 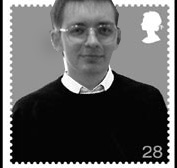