Why play ports? Let's take a quick walk through the TrainSim enemy selection screen in ports of the original Wing Commander! Here's the original from 1990 in EGA and VGA.

The Amiga version swapped the line art for rotating ship sprites! Then the CD32 version made them a little smaller.

Game Arts' Sega CD port brings back the ship diagrams but has them glow when highlighted.

... and Mindscape makes some big changes for the SNES version! Name plate at the top, extremely tiny soda can on the dashboard (seriously, compare it to the hand).

Then Super Wing Commander for the Macintosh and 3DO has totally new ships and even has a second screen showing their stats!

Then the PSP version, included in the EA Replay compilation, takes the SNES version and cruelly stretches it. 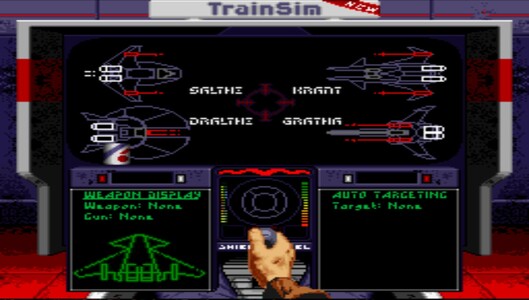 Did you know the TrainSim has a name? If you leave it idle on the PC release you find out it's SQUADRON (which was the original name chosen for Wing Commander)! I believe Chris Roberts is working on the 41st sequel right now!