Here's a little goodie that came in the mail this week. Many years ago we posted about the March 1998 review of Wing Commander Prophecy in PC Gamer. What we didn't show off at the time was that issue's nifty cover disc featuring the WCP demo. As far as WC-themed promotional discs go, it's pretty slick with a prominent Panther fighter and a Tiamat coming through the wormhole on the sleeve. Although it says "Not to be sold without magazine," I'm happy that someone broke the rules so that I could have one of my very own after all these years! And if you weren't aware, this isn't a tiny gauntlet. The full blown Prophecy demo includes four in-plot missions that weren't included in the game! You can download them (and many other awesome WC demos) here! 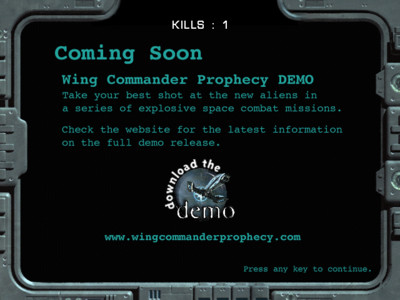 Sure, you've played Prophecy... but did you ever play the demo? If not, you're missing out on a special little chunk of the game. Unlike most game previews, the Prophecy demo contains regular plot missions not available in the retail game. There are four missions that fit nicely in to the game's storyline, but if you'll only see three on your first try due to the branching story. You can still download the 38 meg demo here. You can also download the demo movies pack, which adds a few basic scenes such as your ship launching and briefing introductions. There's even a German version linked from our Files section if that's your preferred language.

Check out that tantalizing "coming soon" teaser you get at the end of the Prophecy 3Dfx Test! And here's the review that went along with the cover disc demo: 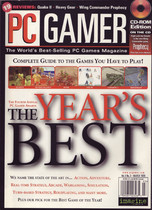 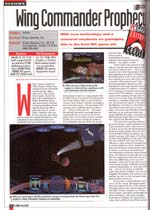 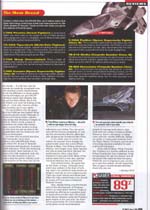 Wing Commander Prophecy is a worthy addition to any Wing Commander fan's collection. It has the gamplay the last two lacked, and all the action that made the first two great. While the movies may not live up to previous games, all self-respecting fans of space combat should definitely check this one out. -89%