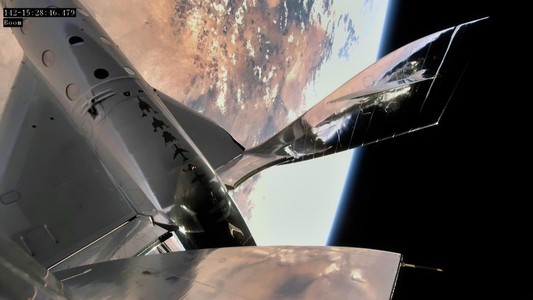 Wing Commander, at its core, is a game all about fancy space planes, so today we're recognizing a real life space plane that's achieved yet another milestone. SpaceX gets a lot of attention for its record breaking feats, but Boeing, Blue Origin and others are trying to accomplish a similar mission. Virgin Galactic is one with a fairly novel approach: their ship launches from an aerial carrier and then rockets up. The program has been seemingly stalled for a while, but today's successful flight is the first in more than two years. With today's exciting test under its belt, the company is a big step closer to offering commercial tour flights up into space. Check out the clips below. The first shows the detachment from the carrier and the third video shows the ship rotate up in the dark reaches of the atmosphere with the curvature of the Earth in the background. It's pretty cool to be living in the future!

Highlights from the #UNITY21 spaceflight:

Space is too good not to share. Our proof is in the incredible views of Earth aboard #Unity21.