Here's a fun Origin advertising pamphlet that you might not have seen if you weren't on Origin's mailing list (like Dan Gheesling was). This brochure went out to promote the holiday lineup on CD. Wing Commander 3 gets top billing, of course, with special mention of the Premiere Edition that was only available via direct sale from EA. A lot of collectors picked theirs up on eBay after the fact without realizing these weren't readily available in stores, although a similar boxed film reel edition was sold at Sam's Club. The reverse side is a System Shock sandwich flanked by Wings of Glory and Bioforge. This sheet represents a magical time in Origin history. The company was no longer held back by the limitations of floppy disks, and they were taking full advantage of the new disc format!

Origin's Holiday CD Line Up is a folded mailer which was sent to registered customers to promote the companys 1994 CD-ROM lineup which included Wing Commander III. 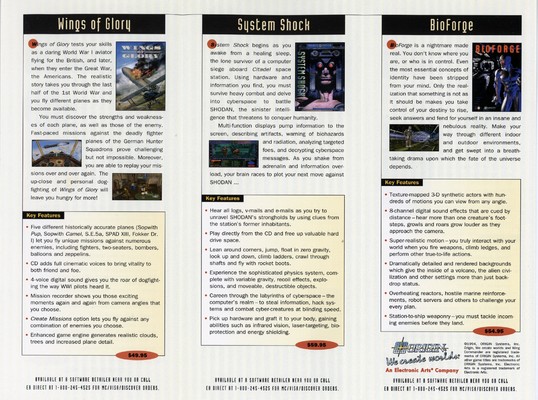 Heart of the Tiger blazes into the entertainment industry with ORIGIN's latest installment in the successful Wing Commander series. This unique gaming experience exposes space sim players to a new world founded on cinematic style and cutting-edge technology. Live, professional actors matted on stunning synthetic sets evoke real emotion throughout the game. As a player, you guide morale by how you interact with other characters. Four CDs hold full speech, explosive sound, an interactive plot and thousands of live action video images. Wing Commander III hands you complete control over the continuing Terran-Kilrathi conflict. As Hollywood-type film techniques merge with computer graphics, ORIGIN leads the way by creating an interactive movie starring you!

I guess the "thousands of live action video images" refer to individual frames of FMV? That's an interesting way to say it.