Get in the Wing Commander Mix

At long last, LOAF had finally hunted down a rare thorough magazine profile of the music associated with Wing Commander 4. It appeared in the April 1996 issue of Mix, a professional audio publication. More than just a preview of a video game, the piece goes into quite a bit of technical depth about how the music was made and recorded. It includes numerous quotes from composer George Oldziey and provides an exciting glimpse into the still nascent field of high end music for games. You can find full scans and a proper transcript in the WCPedia here.

eBay victory! After several years of watching I have the April 1996 issue of Mix, a sound mixing trade magazine. It has an in-depth five page feature on the sound work on Wing Commander IV! My only clue in this chase was a mention in the April 1996 Point of Origin that Mix had done a big feature ‘last month’ so I had to try a few issues. Worth it, the making of articles in trade magazines are solid gold compared to the usual gaming PR stuff! 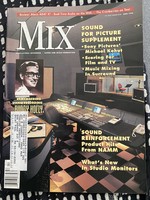 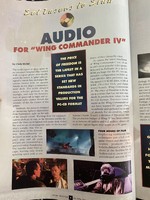 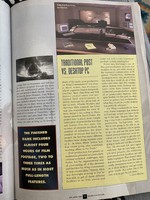 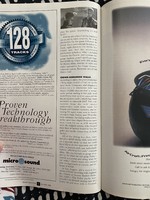 "In Wing III, all the music was composed as MIDI files," says Oldziey. "There were three different versions---one version for General MIDI, another version for Roland MT-32, and also an Ad-Lib version that could be played on SoundBlaster. Each version has certain parameters in terms of the number of notes the sound card will play simultaneously. General MIDI is the best, but even so you can only hear 24 notes at the same time, and some of the sounds I like to use, such as the strings, will use up as many as three or four notes for one sound. So if you want an orchestral sound, you have to be very conservative with picking just the right sound to get a whole effect."

Fortunately for Oldziey, Roberts had decided that for Wing IV all of the music was to be prerecorded, eliminating the limitations of MIDI regeneration. Oldziey first composed the space-flight music heard during "game play" and completed the music for the space-flight portion in April or May. Game-play music, unlike the score that accompanies the filmed sections of the game, may be extended almost indefinitely. Oldziey therefore composed minute-long sequences that can be repeated. "The last part of a one-minute piece sounds like it's segueing to its beginning," he says. "But anywhere within that piece you could be triggered by an event to go to some other piece. For instance, if you blow someone up or get engaged in combat, you could jump to another piece of music that had more tension or is faster-paced."