The original Wing Commander has an embedded phonetic lip-sync track to match up the mouths of the Tiger's Claw crew to the game's dialogue script. While that is an absolutely amazing level of detail, it was only implemented on the first game. The Secret Missions and Wing Commander 2 just use repetitive filler text like "Buy more games like Wing Commander 2." At least, this is what we thought until today!

YPersonified has been using UnnamedCharacter's WC Toolbox to dig into how this works. He's made the exciting discovery that the first mission of SM1 in the Goddard System actually has a full phonetic script! Even more amazing is that it differs from the game's final dialogue! He's put together a few examples below as well as a full video to show off what the lip sync version of events is. Since it's his best interpretation so far, there's probably a few inaccuracies to smooth out yet, but this is still great work. You can help provide feedback to the translation at the CIC Forums here.

With the help from WCToolbox, I was able to look into GAMEDAT files from Wing Commander and managed to get a glimpse at how this game works.

These are generic phonetics, but Goddard 1 isn't:

These are probably well known lines which characters mostly say with mouths in The Secret Missions instead of thorough phonetics seen in Vega Campaign. However, anyone with keen eyes may find out that it works differently in Goddard 1. Apparently, it's the only mission with non-generic phonetics in the series. Still, it turns out that they do not match with the written script we see in-game after all, so I decided to interpret the bar, briefing and debriefing conversations by editing BRIEFING.001 with WCToolbox and make a video to show how it turned out. Many thanks to Shades2585's WCPhonetics for reference. 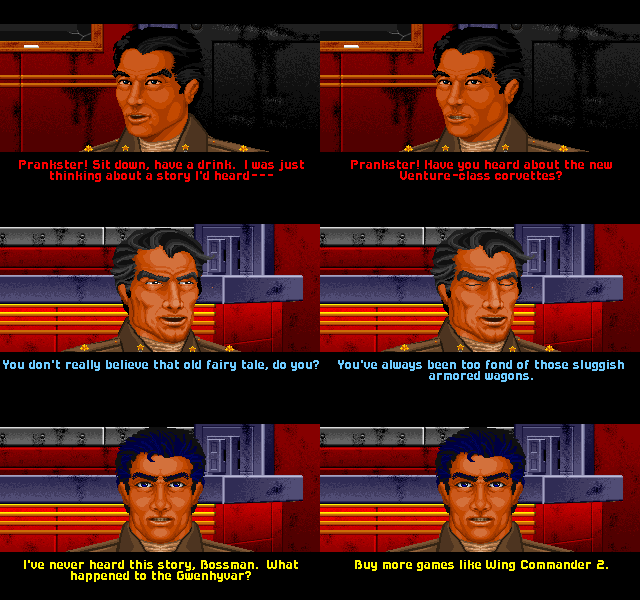 Since this is only my interpretation, it may not be 100% accurate. If you're interested, check out below and guess what Bossman's saying. Also, you can easily notice that these lip sync works are incomplete, as some of them are completely out of context - like Bluehair's self-compliment on bagging Lumbari, or the usual WC2 ads.