Fantastic updates to Howard Day's revamped WC engine have been dropping at a dizzying pace. There are some impressive shield and particle effects as well as more elements from the UI now in place. Although the VDUs are still in the process of being implemented, Howard has already started to think about what they'll look like when they get cracked and destroyed. He's also clarified that he's not strictly trying to remake the original Wing Commander. Rather, this will be a flexible framework that everyone will be able to use to make their own custom campaigns. Sounds awesome! You can see the latest live demo running in a browser here. 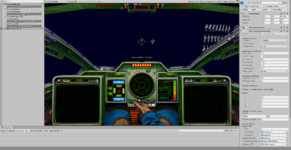 Here's some late progress - better cockpit art, some better color grading on the explosions. Also showing off the Disable/ram hit from the first person. It's a bit much right now, and happens too often (feels a bit like bumpercars!) so I'll have to figure out a way to make it harder to accidentally do.

The goal is to release the framework for making a classic WC game to the community - and then let everyone do what they like with it. I'm not looking to remake the entirety of WC1 - that's way too much work for one guy, but I can put together the basic systems to build a whole game on top of. What I'd like to see is that 10-year stretch of time where Blair's benched on a backwater. Sorta a WC 1.75. Whole new carrier, whole new crew, mix of old an new ships...could be righteously cool.

Running demo update! Uploaded the latest, much improved AI, more fun to watch, lots of graphical improvements, and hands/legs/ joystick/throttle in the cockpit! The AI, though, is doing all kinda of complex Quaternion Slerping behind the scenes to turn where they need to go, with only occasionally directly affecting the controls of the ship their code is essentially "riding". Other times they're moving the ships around based on those ships limitations. The end result is that I have to accurately track like... 3 different rotational and positional methods at once, to make it look like the pilots moving the joystick right. :p

So that's live! the shield and lock indicators are hooked up - Locked flashes on incoming fire, will be steady + tone when you've got a missile on you. I really like watching the shield display work too - very much feels like the WC1 one!