It's Not Faith, It's Cosplay

Wing Commander fans have dressed up as their favorite pilots and paraded around at a number of conventions over the years, but most have been associated with a CIC-sponsored activity. That makes st3lt3k's recent find a fun surprise. He spotted this image taken by foxpaws at the 2011 San Diego Comic Con. Even more unusual is the actual outfit depicted here: a flight suit from the Wing Commander Movie. You don't see too many fans wearing these in the wild - especially a dozen years after the film came out! I don't think I've worn mine in public since 2002. It looks to be an actual prop from the production due to all the small details that seem spot on. High five, dude! 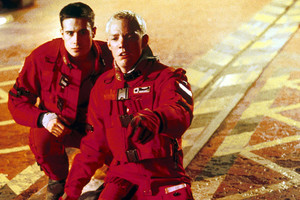 This was a fairly obscure costume. My initial guess was Kaneda from "Akira" until the person clarified.