There continues to be progress in the exciting WC1 Sprite Refresh project. In order to import high quality ships into the original game engine, modern renders must first be converted into dozens of snapshot angles to simulate 3D. This can be a very tedious process to align and get right, so Goliath is developing a technique to automate the image creation. An example with a slick new Dralthi is pictured below! It's wonderful to see how Wingnuts continue to innovate in their quest to enhance the series. 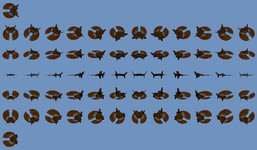 Hooray, it's time for an update! As many of you know, we've been fortunate to have Howard Day around to create some beautiful sprite renders for us to enjoy and experiment with. In doing so, he tackled the first two major steps in the sprite creation process by designing a 3D model and then rendering it with all necessary viewpoints. Based on work done by UnnamedCharacter, we know that Wing Commander utilizes 37 images to represent symmetrical ships but could potentially be modified to support 62 images for asymmetrical ships.

Creating that many renders could potentially be a chore and may even be discouraging to people new to 3D modeling. As part of making a tutorial on creating sprites for Wing Commander, I feel this process should be easier and more accessible. Thus, I've recently been fiddling around with Blender with the goal of creating a script to help both novice and experienced modelers create the necessary renders. Thus far I can report that I have successfully created a prototype script and it is working quite well. In fact, I've been in communication with DefianceIndustries and we've worked together to create the following sprite sheet based on his Dralthi using the script.

The Dralthi sprites have been laid out to match the orientation of the Tiger's Claw sprite sheet above. I think the results look great so far and many thanks to DefianceIndustries for his assistance! At this point I am refining the script further and plan to make it available sometime in the near future.