In the mid nineties, Interactive Entertainment was taking the idea of gaming magazine cover CDs to the next level by having their 'articles' on disc in audio format that would play synchronized with a slideshow of game art. The end result was something more akin to a radio interview. Designed to run in Windows 3.1 and Win 95, the concept was certainly a novelty as most people's internet connections meant that they didn't immediately have access to these sorts of photos or even audio interviews with developers.

This preview of Privateer 2 - which features an interview with Erin Roberts - appeared on episode 19 of "Interactive Entertainment" and dates from when the game was not yet known under the Wing Commander label and was simply "The Darkening," although the interviewer notes clear similarities to the Privateer franchise. You can download the ISOs for these disks from archive.org.

A particularly interesting element of this preview is the pre-release art that features placeholder names for ships and possibly even a few hulls that don't appear in the game itself. These previews were also accompanied by a text article that covered more or less the same ground ans the audio/visual presentation but that still had some significant differences: 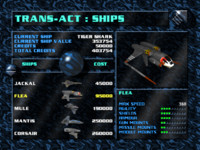 Can an interactive movie really be a game or vice versa? Player control seems incompatible with the kind of pacing and suspense that make the best films worth watching again and again. But many computer game companies stand firm on the idea that the industry must look to Hollywood for redemption. Perhaps the most successful of these determined companies is Origin Systems in Austin, Texas, who have, arguably, come up with the best Interactive Movie to date, Wing Commander III. But the self-proclaimed "world creators" are never content to rest on their past merits. The Darkening is currently in deep production, and it promises to provide a thoroughly unique play experience, as well as a level of film quality rarely seen outside of art-house theaters.

The mind behind The Darkening is Erin Roberts, brother of Chris "Wing" Roberts. Does this mean that Origin practices nepotism? Well, it's not quite as bad as it might look. Erin's worked for Origin for the past five years. He put his hand in on all the Wing Commanders as well as Strike Commander and Privateer before being given a chance to head up his own project.

The player takes the part of an amnesiac, the victim of too much time spent in a cryogenic capsule. When he is finally awakened, he has spent over ten years in sub-zero slumber, and has no idea who he is or how he arrived. On one level, the game is a story of self-discovery, as the player goes off in search of his true identity. But the game is considerably more flexible than you might guess. Rather than following the linear motif of the Wing series, The Darkening is more in the free-form exploration and trade mode of Privateer and the Elite series. While traveling around the universe, you may encounter people who can give you clues to your true identity, but you don't have to follow them if you don't want to. And if you do follow them to the answer, that doesn't mean the game is over.

You start the game with a very basic ship (kind of the galactic equivalent of a Yugo) and limited resources, but you can hire yourself out to accomplish missions for whoever you choose, and thus increase your funds. With more money, you can buy a better ship or upgrade the one you have, which gives you more resources for accomplishing more missions. And there's lots of opportunities for diplomacy and trade.

But, as mentioned before, this galactic game is also very film-intensive and stylish. Instead of imitating Hollywood at its most overbearing and obnoxious, The Darkening takes many of its cues from world cinema. It's funny how long it has taken for the international scope of the game industry to make its presence felt in the style of the games. The most prominent American in the cast is Christopher Walken. Now that's no small thing, but the rest of the cast includes John Hurt (Alien, Elephant Man), David McCallum (The Man From UNCLE), Brian Blessed (Flash Gordon, Robin Hood: Prince of Thieves), David Warner (Time Bandits, Wild Palms), Amanda Pays (Max Headroom, The Flash) and Jurgen Prochnow (Das Boot, Judge Dredd). Less well known to American audiences are French actress Mathilda Mae and Clive Owen, the British actor who plays the lead. The video sequences were recorded in England's Pinewood Studios, a venerable facility that has provided space for many top-notch films including Raiders of the Lost Ark.

While this is not entirely the first game of its type, it is the first time that digital video has been used so prominently in the genre. With so many different planets and cultures to visit, a lot of attention has been given to the issue of making each world feel really, well,...otherworldly, as well as different from each other. Each planet has a different terrain, a different architectural basis and a different musical style. And let's not forget, this is from the company that brought the Kilrathi to life. Expect each world to have it's own theology and morality system, as well. And you've got to negotiate with these people!

Erin Roberts and the design team have particularly kept new players in mind in creating the interface. The design is very instinctive and user-friendly, with the hope that The Darkening will be picked up by film fans eager to see the latest thing Christopher Walken & company are in, as well as die-hard Origin fans. Expect The Darkening to hit the shelves this February.