Confederation hull plating is well known for its green texture, and terran soldiers even occasionally sport a green tinted outfit, but it's a far less common color on the Kilrathi (aside from the kats that actually have green skin). We know the common brown color of Kilrathi ships comes from the hue of their local durasteel, but there's one major exception to this: the green Salthi - or Jalthi, rather. The Secret Missions for the Super Nintendo had to squeeze to fit everything on the cartridge, and one noteworthy cut was the elimination of the six-shooter Jalthi model. The ship wasn't removed form the game however, and it appeared instead as a Salthi made over with a green color palette. It's an interesting design choice to remake the game's weakest ship as its most powerful by simply swapping color, but it's a decision the designers did not shy away from. In fact, they doubled down and made the green Salthi/Jalthi the premiere ship that appeared on the box cover, with the included promotional poster and in various marketing materials. In these detailed drawings it appeared loaded up with guns and missiles, so there should have been no surprises when this hard hitting little ship appeared. And this isn't the only time the Salthi could be confused for a super ship. The Super Wing Commander Salthi and the Privateer Salthi with steltek guns both use the same model! 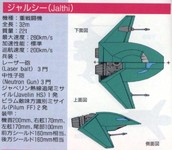