UnnamedCharacter has released an update to his WC1 Live Viewer program. The previous iteration of the app displayed game state statistics on flying objects throughout the battle space in your Wing Commander 1 game. It's not an editor, but rather, it can be paired with things like the WC Toolbox to help understand what's going on behind the scenes. In response to a number of recent questions on how the game grants medals, the mission's current medal point status is now displayed. This relates to a relatively complex formula that WC1 uses to score different actions and determine if the player achieves an eligible award for certain missions. The program works specifically with the Kilrathi Saga version of the game in Windows. You can grab it at the CIC Forums here. 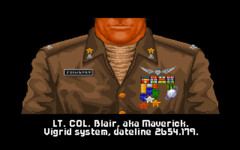 Since there has been a few post recently about medal scores, I thought I would update the WC1LiveViewer. It has the same restrictions as before, only Kilrathi Saga is supported (WC1.EXE and wing1.exe).

To use it, start the game, then this program (WC1LiveViewer). If it recognizes the running process, it will populate the table with game data. Since the game data is continuously updating, I find the best approach is to keep pausing the game during gameplay.