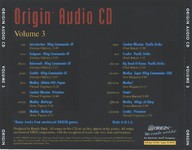 The Wing Commander Orchestral Recording Project Volume 2 Kickstarter has crossed $7,500 in crowd funding and we're continuing our focus on topics relating to George Oldziey's amazing Wing Commander scores. Today, we're going to take a look back at the first album to feature Wing Commander music from George Oldziey: ORIGIN Audio CD Volume 3. For those of us into collecting Origin music, this was the disc that got us started! ORIGIN Audio CD Volume 3 was included with the 'Premiere' edition of Wing Commander III. This edition was available for order only direct from Electronic Arts and it featured a host of extras and a metal 'film can' box. While fancy collectors edition SKUs of games are common today, Wing Commander III was among the first to offer the option.

The first four tracks on the CD are from the Wing Commander III score and they are wonderful. I have fond memories of playing those four on rotation, in the days before readily acessible mp3s! Included are the Intro, Endgame, Behemoth and Credits themes (Behemoth was later recorded as part of Mr. Oldziey's first crowd fund project.) Wing Commander fans also got music from Privateer and Super Wing Commander, making it a pretty fantastic collection. The compilation also includes music from Ultima VIII, Pacific Strike and a 'mystery game' which was likely the cancelled mech game Prowler.

Why 'Volume 3'? ORIGIN Audio CD Volume 3 was the third album released by Origin... but the first two are fairly rare and predate George Oldziey's involvement with the company. Volume 1 includes music from Wing Commander I and II and Volume 2 is tracks from Strike Commander and the Ultima VIIs. Volume 2 was sold directly via mail order, while Volume 1's histroy is somewhat confused (it was made as a promotional item, reports vary as to whether or not it was ever sold.) For those searching for copies, the names don't quite match up correctly, either: the first is ORIGIN SOUNDTRACK and the second is ORIGIN SOUNDTRACK SERIES Volume 2.

You can pledge for the Wing Commander Orchestral Recording Project Volume 2 here.