Spending a rainy LA day diving into orchestrations of more of my #WingCommander music! Stay tuned!

Wing Commander fans were disappointed last year when a crowd funding campaign for a second volume of Mr. Oldziey's Wing Commander Orchestral Recording Project failed. Mr. Oldziey promised he would carry on, and now it looks like that is happening. We'll be standing by to support any future campaign he launches, as the world needs more Wing Commander music!

Mr. Oldziey also posted a piece of Wing Commander sheet music from his work, asking followers if they could identify it (below.) 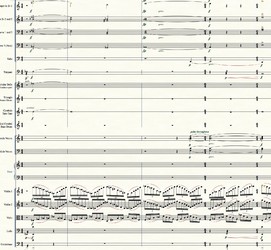 The answer? It's from the endgame of Wing Commander III and specifically the destruction of Kilrah (mouse over to reveal!).