Where Everybody Knows Your Clan

Don't drink and fly! The 1995 Wing Commander Customizable Card Game (CCG) includes a pair of 'LUCK!' cards which discuss this exact scenario: the Confederation "TOO MUCH VAK'QU" and the Kilrathi "TOO MUCH FIRE LIQUOR" cards allow the player to return an individual opposing pilot to the Ready Area, effectively disabling them for the turn.

The cards actually simulate a mechanic from Wing Commander III in which the player who chooses to drink before a mission is punished with incorrectly-responsive flight controls. Both names are representative of the CCG's dedication to deeper Wing Commander lore. "TOO MUCH FIRE LIQUOR" references Wing Commander: Freedom Flight, which introduces a Firekkan alcohol-and-seed brew which is alternatively called Firekka's Finest, kika'li, Fire Liquor (Voices of War) and Firekka Firewater (Fleet Action.) "TOO MUCH VAK'QU" references a Kilrathi beverage introduced in Wing Commander: Fleet Action that Hunter claims will "burn a hole right through durasteel."

None of this is new information, of course. The real surprise discovery is that the human and kil pilots pictured on their respective cards are actually tying one on together! Artist Bob Eggleton, the man responsible for the card art, posted a picture of the original painting to his blog. You can clearly see that a single wide image was cut in two to create two separate card! Mr. Eggleton notes that the painting was named "Drinking with Aliens" and was a 6"x15" acrylic. The piece has already been sold, and I can't help but be jealous of the owner! 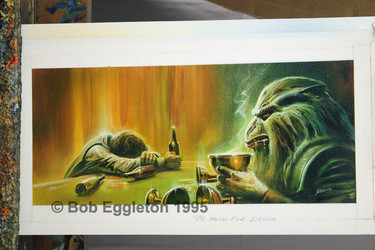