To further commemorate this past week's WC2 anniversary, Music_Guru has unearthed a second trove of articles that explore the period just before and after the game's release. There's a whole lot of reading ahead, so let's get to it! First up is a a single page from the May 1991 issue of Zero based in the UK. It's a brief preview that showcases Thrakhath's Bloodfang from the WC2 demo from a head on angle. Once the game is released, the December 1991 issue of Zero gets the full review. It's full of polished screenshots and praise, but it gets a few points off for being skewed more towards being an interactive movie rather than a game (just wait until they see WC3/4!). In the middle of the pack is a German review of WC2 from the December 1991 issue of Aktueller Software Markt. The ratings are on a very interesting scale - to 12 points rather than a more conventional 5 or 10. Fortunately, Vengeance of the Kilrathi scores a 10 or 11 on every mark. 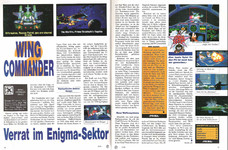 After that are several smaller mentions. The July 1991 issue of Questbusters seems to be covering this space sim because of its relationship to Ultima. There's some fun mentions of the games being played on a large screen as well as a tease about a future role playing and Wing Commandery space hybrid game. The June 1992 issue of PC Review acknowledges all of the recent wins at the Golden Joystick Awards in London. WC2 took best graphics, best soundtrack, and PC game of the year! There's a dated reference to all of the awards that Silence of the Lambs had recently taken home itself. A second PC Review from August 1992 suggests WC2 as a better sim buy than another contemporary title, Epic. Finally, the May 1991 issue of Advanced Computer Entertainment has another mention of Ground Commander, an early working title of Strike Commander. Whew, that's a lot of different print sources in one post!

Don't forget that WC2's 25th anniversary live stream will be next Saturday, September 17! Tune in at noon on Twitch to watch me watch over LOAF's shoulder as he expertly cuts a swath through the Enigma Sector. Disco Lando will be running the elaborate AV setup, and he created a second kickass overlay for the event. This time it's a Sabre!

September 17th at 12pm PDT. The return of @banditloaf to your screens, guests and giveaways. https://t.co/I4jZ9jefvi pic.twitter.com/hygz4UVk5H