Peer Into The WC2 Development Process Circa Spring 1991

The Wing Commander 2 celebration continues with a pair of great articles found by Music_Guru. First up is a really cool Origin profile written for the April 1991 issue of The One. Wing Commander was barely six months old at this time, but the team was already well on their way with advanced WC2 character modeling, high resolution ship images and even early murmurings of Wing Commander 3. They also introduce "Ground Commander," which was an early working title for Strike Commander. Chris Roberts remained focused on Strike into early 1993, so it's no surprised the suggested WC3 release date that year actually ended up being late 1994. It all sounds like a terribly exciting time!


The final scan below is from the May 1991 issue of Advanced Computer Entertainment. This article talks about the introduction of autodesk 3D Studio at Origin and the fantastic designs they got as a result. As the state of technology was changing very rapidly in the early '90s, the tools game developers used to take advantage of all this quickly evolved too. We're glad they didn't cut corners on this and managed to put together such a beautiful game! 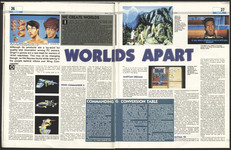 Wing Commander 2 is set six years after the Tiger's Claw victory in the Vega Sector. In the game, you'll pilot six new Terran starfighters in a variety of missions. You might be sent to retrieve refugee life pods with your tractor beam, defend against the undetectable enemy stealth fighters or fly a jump-capable straighter against a Kilrathi starbase. "In Wing Commander 2, we'll take the Wing Commander technology beyond the imaginable - with Dynamic Intelligence, digitized art and speech, new and unusual ship and weapons technology, an intensely dramatic storyline and characters, and more of the non-stop action that made the original Wing Commander into a bestselling game," says Origin in its sales-pitch. Wing Commander 2 will be released on the PC in late summer.

You can also find The One's coverage of Wing Commander's Amiga development in our archives here.