The first test release of Wing Blender 2.0 has been released! The program allows models to be easily imported and exported between the Blender app and Prophecy/Secret Ops Vision Engine for easy 3D model manipulation. Even if you're not planning to mod the games, it's interesting tool to play around with and explore the guts of the Windows WC games with. Kevin has also made a documentation page for more information on how to use the program. Grab the beta here. 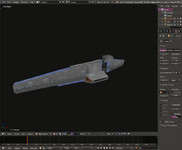