We once again interrupt our regularly scheduled Wing Commander programming to share some phenomenal news. Last night SpaceX managed to successfully land a rocket vertically after it delivered a commercial payload in orbit. Such a feat is so common in science fiction that it wouldn't be surprising if the average person just assumed we could already do this, but in fact this type of landing has never been done before. It was only last month that Blue Origin managed to land a rocket after briefly touching the boundary of space. This week's achievement is significantly more complex due to the nature of the spacecraft in play. The Falcon rocket had to reach orbital velocity/altitude, and then it flawlessly performed its primary mission of deploying 11 communications satellites before coming back down. The hovering booster looks cool enough, but my favorite shot might be the time lapse photo showing the orange double-streak from both ascent and decent. One of the things that draws in and captivates sci-fi fans is the excitement of scenes like these. It's even better when we get to see the real thing become possible! 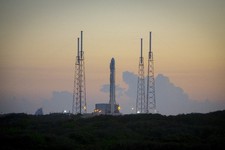 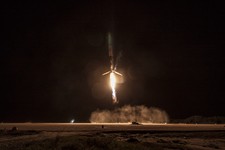 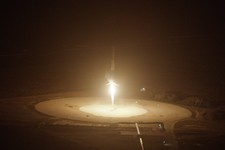 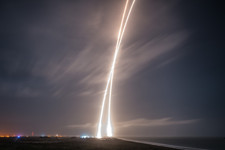