DefianceIndustries is back with another status update on his big Secret Ops upgrade. He's made progress getting the ships to display properly in the viewer with descriptive text. These types of tweaks may not be as glamorous, but they're critical for full immersion. Meanwhile, there are some bigger things (literally) in the works that should come together soon! 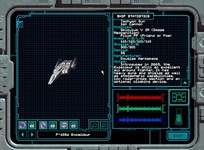 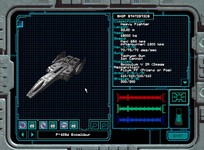 Hi all, quick update: I've been battling a some kind of bug (pun intended) so I've not been able to make as much progress as normal. I'm currently texturing a Panther and Dark Sentinel is working on a couple of models for the pack. He's working on his Plunkett, the Wasp, and a Moray.

Whereas before I was simply hacking models into the viewer to test them, the Tigershark being my most common victim, I've started adding the extra fighters into the viewer in a more permanent basis. I'll also be updating the flavor text for the updated versions in SO; so for example the Piranha is actually a C variant and the Tigershark is a B. So here's the more or less "official" entry for the Excalibur. When I finish the Tbolt, it will also get an entry. I'll probably also add Confed capships into the viewer at some point as well.

In other news: gr1mre4per has teased a project he's working on that will give us a lot more flexibility in how we do Capships and some fighters by allowing the engine to accept substantially more polys than it does today per mesh. I won't spoil it for you and let him do the big reveal, but suffice to say what I've seen so far is pretty impressive and if it works as expected, it will really push the needle for the Vision engine.

So exciting stuff in the hopper! Watch this space.