There's another major resource out there for Wingnuts to get their Wing Commander Movie fix. The film was first added to Amazon's Unboxed service way back in 2006. Then it became a high definition Instant Video selection in 2011, and it was marked down to $10 early this year. Now free streaming is available for members with Amazon Prime. The movie was huge during its Netflix debut in August, but there is a subset of people out there who subscribe to Prime for free shipping and not to any dedicated video services. Now's their chance to catch WC for free! Fans with the Amazon Instant Video app for mobile devices can even download the movie for offline/airplane viewing! 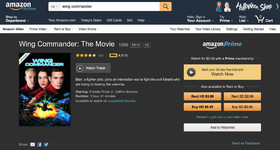 Blair, a fighter pilot, joins an interstellar war to fight the evil Kilrathi who are trying to destroy the universe.