Adm_Maverick has made good progress scoping out and scaling the Excalibur for his next paper model. He's aiming to go beyond the detail included with the in-game models and produce something comparable to the F-103s depicted in cinematics or printed materials. Although it might looks like he's already got the shape down pretty well, he's continuing to scrutinize how everything lines up so that he doesn't encounter any tolerance issues when he goes to physically construct the planned 12 inch design. Fans have made tons of paper WC ships over the years, but - surprisingly - this might be the first Excalibur. You can follow each step of the development at the CIC Forums. 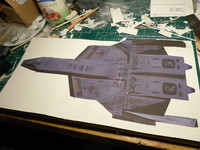 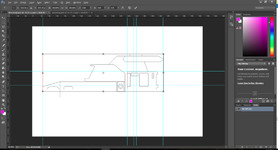 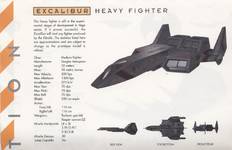 I mentioned that these are first passes, why is that? Well... it's because they don't match up exactly with each other. It's too late for me to go into all details but as an example. The widest part of the front boom where the cockpit is, it is widest on the front view, narrowest on the top view, and just slightly narrower in the bottom view.

So what does this mean? Well, it means I have to go back, pair up the line art pieces with each other and decide which part of which version I want to take as the 'correct' version. While the web version of the image above sizes out to be about 4" wide, I want to build a 12" model from these designs. So if I scale everything up by a factor of 3, and I have one part from the bottom that is 1mm wider, then the same part from the top view, but the rear version is 1mm to the left, I'll wind up with a part that started out as a rectangular cube but when built comes out as a lop-sided rhombus. So guess what I get to do over the next few days....

I'll warn everyone now, this is going to take a while to complete. It will also be my first totally scratch built and self-designed model. The real challenge... I have no actual 3D design experience or systems. So I'm doing this all as I figure it out. Who wants to go on an adventure?