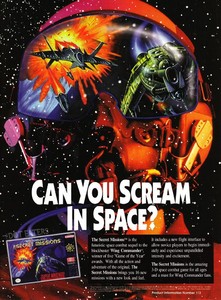 The Super Nintendo version of The Secret Missions is well known for its exotic cover art. Memory limitations at the time meant that the heavy Jalthi fighter was replaced with a green-tinted Salthi model. Mindscape chose to double down on this change by emphasizing it on both the box and a nifty fold-up poster included with the game. This threw some people off at the time, but the heavily armed olive drab Salthi has become a fun relic from the age where software developers were forced to do more with less. LOAF recently stumbled upon a really cool pilot advertisement that we've never seen previously. Does anyone else recall seeing it in late 1993 or 1994? You can read up on all sorts of interesting facts about Wing Commander on the SNES here.

The Secret Missions (TM) is the futuristic space combat sequel to the blockbuster Wing Commander (R), winner of five "Game of the Year" awards. With all the action and adventure of the original, The Secret Missions brings you 16 new missions with a new look and feel.

It includes a new flight interface to allow novice players to begin immediately and experience unparalleled intensity and excitement.

The Secret Missions is the amazing 3-D space combat game for all ages and a must for Wing Commander fans.