"Magnificent, aren’t they? I bet you wish you'd had one of those during the war!"

There are many talented Wingnut artists out there, but it's not every day a new one pops up to enter the fray. DefianceIndustries actually isn't a complete newcomer to the Wing Commander community, but this is his first time sharing one of his projects - and he picked quite a scene to do it with! The wallpaper below features a prominent Vesuvius class carrier flanked by a pair of Murphy class destroyers. There's what looks like a Concordia carrier in the background as well as a wing of Piranhas flying escort. Whether bearing down on a Kilrathi starpost or posting to the CIC Forums, this task force makes a hell of an introduction! 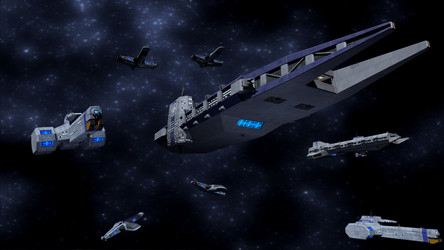 I've been lurking around these forums for a good many years and figured I should probably properly introduce myself. But because it's rude to show up in someone's playground without bringing a toy I figured I'd share some of the wingnut work I've been doing of late.