Chronicles of the Claw Returns To Vega Sector 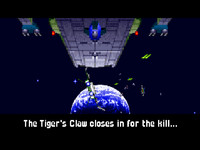 Sylvester recently noted the lack of new Wing Commander fan fiction and set out to do something about it! He began a story titled "Chronicles of the Claw" back in 2006, and he's dug up the manuscript to share with fans today. This version is significantly expanded and enhanced compared to what he came up with originally, so it's worth a look for all fans with an interest in this type of thing. Fan fic sometimes gets a bad rap on the internet at large, but the reality is that there are many talented writers out there dreaming up stories in their favorite universes. Although there have not been many new threads recently, over the years Wingnuts have created some three hundred topics in the CIC Fan Fiction Forum. There's something in there for everyone, and all stories are ripe for commentary. You can check out Sylvester's story here, and he'd much appreciate your feedback!

“Okay people, let’s get started.” Colonel Halcyon began. “First, the good news. Boxman’s escape pod was successfully recovered, he has a broken leg, but the doctor says he should be fine. Now on to business.” He pointed towards the map screen. Blair already knew what the mission would entail, Halcyon had briefed him in private a few minutes before the other pilots had arrived. The plan was risky, but it seemed the best option under the circumstances. “The Tiger’s Claw is currently on course for the Blytheheart jump point. We are taking a route that will take us past this pocket in the asteroid belt, where intelligence we have gathered shows the location of a Snakeir class carrier.”

“Now, up until this point, we have been sending out signals indicating that we do not know the location of the Kilrathi battlegroup. We want the Kilrathi to believe that we think the system is clear, and will proceed with standard escort to Blytheheart. And that is exactly what the Kilrathi will see when we pass their location. We will fly at standard cruising velocity with a six fighter escort screen.” Soft murmuring began to fill the briefing room.

“Yes Lieutenant. When we pass the Kilrathi battlegroup, we expect that they will emerge from the asteroid belt and attempt to attack us from the rear. As soon as we get indication of the Kilrathi attack, the Tiger’s Claw will immediately go to battle stations. We will have fighters standing by, already prepped in the launch tubes. They will launch and proceed to attack the Snakeir and their escorts. We will continue launching wings as quickly as possible until all fighters have taken off. This is a full smash, everyone is going up.”

If you missed it earlier this week, also check out the latest WC From the Ashes Newsletter for another recent story written by a fellow fan!