Here's a funny/horrible story involving Robert Rusler, Seether from Wing Commander 4. Costar Robert Downey Jr. reports that the pair made a giant mess in a poor girl's trailer on the set of Weird Science. The unspeakable details are below. "You're gonna wish you never met me," indeed! 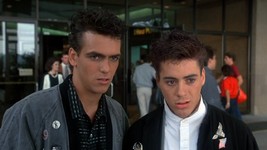 "It wasn't Kelly LeBrock. Myself and my costar Robert Rusler had been threatening that we were going to drop a three coil steamer in someone's trailer during a large portion of the shoot. Then finally, one hot hungover day..."

"It was not [LeBrock's] trailer. If it was her trailer, she'd of had a sense of humor, but it was this gal named Babette Props who was just this sweet, nice Christian girl and we happened to go take a dump in her trailer."

"We're not doing it in the toilet! I think we did it on her set chair. Whatever it was, it was wrong. We were crazy and were going to let everyone know how risque and off the wall we are. So [Props] comes back into the trailer and walks out literally holding her nose and then Joel Silver, who I knew only as someone I was afraid of and was a big Hollywood producer, said 'Everybody line up!'"