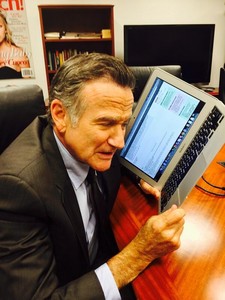 There's been an outpouring of grief for actor Robin Williams since his untimely passing yesterday. Many others have written more wonderful tributes than I could craft, but we would like to take a moment to briefly pay respect to our fellow gamer and Wing Commander fan. Mr. Williams and his wife were engrossed in the 8-bit Legend of Zelda in the late '80s, so they named their daughter after the title character. His son was also named after Cody from Final Fight. Articles have even popped up listing out what franchises he was most into, and one of them was Wing Commander.

He was so into the series in the mid '90s that he popped up on the set of Wing Commander 4 during its filming. In fact, Chris Roberts even wanted Williams to play Merlin in the Wing Commander Movie. A couple years back, Chris mentioned that he regretted how Williams' absence zapped some critical humor and narrative sequences in the film. Ultimately the Merlin AI character was largely cut from the movie, although Mark Hamill did voice the uncredited part during computer dialogue sequences between Blair and his Rapier. We can only imagine how memorable it would have been as originally intended! Alas, if an enhanced director's cut is ever made, this particular casting will never be. Goodbye, Mr. Williams.

CHRIS ROBERTS - Losing Merlin was the biggest mistake in my opinion. It didn’t happen until mid-way through post production. We shot everything and the intention was to film a big star (I was wanting Robin Williams) on a green screen for a day or so and then composite in a holo –effect. We were over budget and the producer, Todd Moyer, had persuaded me to try a cut without Merlin as he didn’t think we needed him and we couldn’t afford the VFX shots or the additional green screen shot (let alone a fee for a big actor). When I didn’t get a response back from Robin Williams' camp I gave in to the idea. I really regret it as losing Merlin we lost a lot of the humor plus a lot of exposition that explained the whole Pilgrim backstory – not to mention the fact that the Captain turned out to be a Pilgrim. Between losing Merlin, the bigger opening (when the Pegasus was more like Hawaii of Pearl Harbor) and the Kilrathi not working I feel a lot of what made the script work for me was lost. The final film was too simple without these extra layers. I have often toyed with the idea of taking the original footage, re-doing the Kilrathi with today’s digital VFX, filming Merlin and making a new cut – I even proposed it to Fox a while back but they declined. When I get the rights back in 2015 I may do this as it would all be a lot cheaper now than before. I don’t think it would make WC a great film as there are some basic flaws with it, but I do think it would make it better.

AD - This is interesting... I never really pictured Robin Williams in the role when reading the novelization or the script. I always imagined his lines being delivered in a more dry/ironic kind of way.

CHRIS ROBERTS - I wanted Robin Williams because he liked and played Wing Commander and I thought he could handle Merlin's dry humor (he doesn't always have to be whacky Mork). Funny thing is that I ended up working with him on The Big White.