Long time visitor and Wing Commander fan Arvin Bautista has tried his hand at directing a short sci-fi film. Vultures in the Void, a flick about pirates trying to hijack a space freighter, cites Wing Commander, Mass Effect and Macross among its influences. You may recognize the actors from supporting roles in the Fifth Element, The Crow or the Matrix Reloaded. Vultures in the Void runs some 15 minutes and is free to watch here or on Vimeo.

Turns out Consortium pilot SUNSET BISMARCK (Brooke Nevin) and space pirate LUCKY MIKE (David Franklin) are in on it together.

It would’ve been so simple, if not for the arrival of two more cutthroats, DEADSPEED (Bai Ling) and her sidekick SPACE CLOWN (Tiny Lister). Now everyone wants a piece.

With Consortium backup en route, who’s going to make off with the booty? 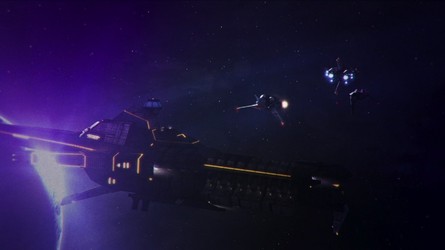