Together Again for the First Time

Klavs spotted a fun pairing in the 1983 film Blue Thunder. Jason Bernard plays "The Mayor" while Malcolm McDowell is Colonel F.E. Cochrane in the film. You can watch them together on YouTube. This mirrors the episode of Beauty and the Beast where Mr. Bernard acted alongside Chris "Hawk" Mulkey. These guys really got around! 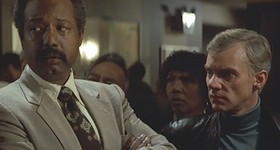 Malcolm McDowell & Jason Bernard in 'Blue Thunder' also staring Roy Scheider! It's probably been posted before, but it just tickled me pink. :)