New Bearcat Hits The Drawing Board

TurboTim hasn't been in the news for a while, but he's trying to get back into the Wing Commander groove. Tim's new at 3D modeling, but there's already a good start to a Bearcat here. The geometry is pretty accurate, and the wide gun spacing has been resolved with some inboard weapon mounts. Additional improvements are detailed further below. This has always been a popular ship, but it hasn't shown up in many projects over the years. Here's hoping we see more of them around! Help provide feedback to refine the model at the CIC Forums. 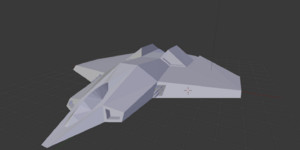 Hi everyone! Haven't posted anything in a very long time, but I figured I'd share something I've been working on. With all the new stuff going on for Star Citizen and the 3D model prints through Shapeways, I started thinking about how one of my favorite fighters would work. So I give y'all the Bearcat. This is my first model, and I'm extremely new at this and still learning. Here're some of the things I changed/imagined how it would look when finished.

First, the engine thrusters. Instead of the Bearcat's six engine ports, I thought that two large thrust vectoring nozzles would be more fitting. Next, I moved the wingtip mounted tachyon guns to a more central position. I think with internal missile bays, the missiles would launch one by one out where the guns were. I also made small housing area for the guns in case anyone would want to swap the guns out (I honestly don't think I have the scale of the tachyon guns right, but that can be fixed). I haven't added the maneuvering thrusters yet. Still learning on how I could do that, but I think they'd work best right where the wings meet the fuselage and also near the cockpit. Instead of intakes right by the cockpit, I decided to make those the retro rockets for reverse thrust and leave the intakes by the engines. Finally, the last thing I can think of right now (it's 2 am) is the cockpit. Once that's finished, it's going to be a strut-less or near strut-less canopy to give the pilot an uninterrupted field of view.

Like I said, this is a work in progress, but I would appreciate any feedback on how to make this better or any ideas on features to add to the model. Also, if anyone can point me to tutorials on texturing, I have an idea on a paint scheme I want to use on this. I'm going to work on this when I can so progress might be slow, but hopefully the final product can be something everyone can use and enjoy.