Klavs has another new fighter on deck. The Rapier from Super Wing Commander joins the fight with a few touches borrowed from the Arena F-44X, but most of the ship's style is borrowed from the Mac/3DO look. It has a solid metallic texture and plenty of decals that keep it in line with the other ships at Terran Fleet Supply. Maniac even has some nice things to say about it below. You can order one now here! 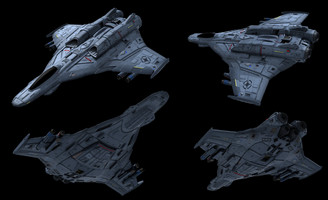 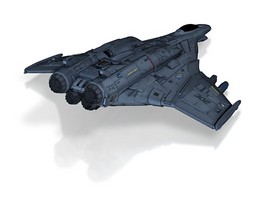 I'd never been on a flight deck that quiet.

There were little clusters of people here and there. Two, three to a group. People were saying goodbye, but for some reason it didn't feel sad. It was like the quiet before a wedding, rather than the funeral we all knew it to be.

I saw a pilot I didn't know manhandle a tech twice her size against a Rapier and kiss the hell out of him. I saw Chris and Jeanette just smiling at each other. I saw Kevin Tolwyn calmly preflighting his ship for the fifth time. I saw Davis, one of the kids plucked right out of basic flight, savoring a carrot with a huge grin on his face.

Three Zero Two surely didn't look unique, just your average, slate grey F-44G. Reasonably clean, well maintained, a hull patch here, a scratch or a greasy footprint there. No kill markings, no shark's mouth, no flamboyant paint scheme. Not even a name on the canopy rail.

Three Zero Two was something special.