Klavs' latest design is another star of Wing Commander 2, the heavy attack Sabre. It's looking both sleek and vicious in these new renders. The F-57 still needs a set of colorful textures, but we can't wait for this bird and its Broadsword bomber brother showing up at Terran Fleet Supply soon! 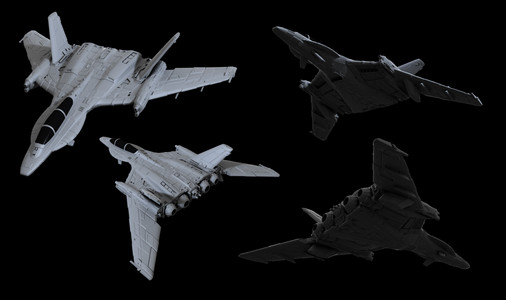 Blair put the eight of us in line astern formation.

Single file, with one Sabre behind and slightly below the next, the carrier could only hit the leading ship, and the rest of us would be protected from the defensive fire while we went for torpedo lock.

The tactic would guarantee that most of us would make it to torpedo launch. It was inspired, except that Blair forgot about his own skin, like always. The leader of the formation would be absorb the brunt of the Kilrathi point defense, sparing the other ships, but sacrificing himself.

Not to be out done in the suicidal bravery department, I firewalled the throttle and broke formation. Couldn't let him have all the glory, could I?

Cuhna squalled at me, but quickly shut up as I bored in on the carrier. Dry launching everything I had, I threw it into a 960° slew/spin, firing intermittently at the carrier while we corkscrewed along its length. I heard wretching over the ICS, but I also felt the 'whump' from the turret as Cuhna also fired at the carrier whenever it flashed into view.

My torpedoes didn't have a chance at penetrating the carrier's shields without a lock, but the Kilrathi were concentrating on us anyway, throwing up everything they had to take us out. Hopefully, it was buying the others a smoother ride.

As I spun over the bow of the ship a flight of Jalkehi flashed past, launched forthwith to put an end to our monkeyshines. Blair would be close to launch now, but I had to keep the fighters off the strike team while they gained a lock.

I charged into the Jalkehi formation, fighting them for what seemed like hours. All the while Cuhna whumped away with her little turret. At some point, I noticed the whumping had stopped.

Then the sky lit up like a second sun.