Study Up Before Hitting the TrainSim

Bearcat took the Wing Commander sprite art that was recently posted and produced a fun training reference. It's a wonderful throwback to some of the original tactics diagrams from the first few WC games. He's mixed some classic ships and techniques with preliminary Star Citizen physics in order to suggest how to maximize the effectiveness of a topside turret. A similar method could be used by Prophecy's Devastator bomber. It's pretty nice to see these in color - it would be great to see a full series' worth! 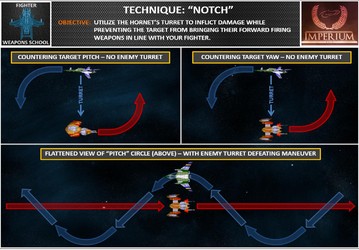 I wanted to use them to put together notional tactics diagrams for Star Citizen based on our current guestimations of how the physics and weapons will work. Since SC has a shortage of ship profiles, and I look for any excuse to reference the WC1/2 era, I reasoned that WC2 sprites would serve well as stand-ins.

Although after creating that I realized that the Hornet's turret might have trouble rotating to +90 degrees. I modified the tactic to be yaw based (shooting sideways) and threw the Hornet/Scythe graphics in there.

Thanks again for the sprites though. I'm still splicing them in everywhere on the flimsiest of justifications.