NinjaLA is in the middle of a sketch-a-day project, and some of his drawings are based on Wing Commander. Right off the bat, his site's header is flanked by a sharp looking Scimitar and Hornet. There's also a nicely colored Kilrathi soldier, and he seems to be holding a Dor-Chak rifle. Finally, his new Dralthi sketch includes a lot of detail in an energetic package. You can find more images at his Tumblr here. 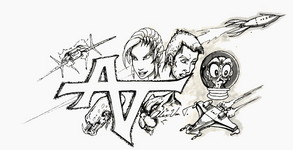 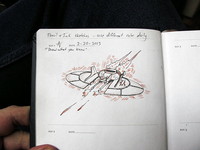 The standard Kilrathi sidearm in shipboard operations is a light-energy weapon called the Dor-Chak (“Striking Bird”) in the Kilrathi tongue. It usually weighs about 6 kg, and measures 29 cm from barrel-tip to the end of the stock. (Some clans wield variant Dor-Chaks, which may look somewhat different from the standard model, but most function virtually identically.) It is believed that the Dor-Chak, in its modern form, was developed by the Kilrathi 50 to 100 years before contact with humanity.

The Dor-Chak is a multifunction weapon. There's a short-range, wide-beam setting (good for about 10 meters against unarmored targets, with a spread of about 2 meters), a long-range narrow-beam setting (able to penetrate an unarmored human target at 200 meters), plus a 1-meter torch mode, for cutting through hatches and bulkheads. Its crystalline power supply is good for about 20 minutes of continuous use, after which time it must be discarded and a new one slotted into place. Most Kilrathi warriors go into battle carrying at least five fully charged power supplies for their Dor-Chak.

Confed's M-47 semiautomatic laser, which is quickly becoming the standard weapon for planetary operations, is based directly on technology originally created by the Kilrathi for the Dor-Chak.