Must Get Back To Work Here

One of the most iconic moments in Action Stations is the final communications between TCS Yorkshire and the remains of the Confederation force. The young executive officer of the Yorkshire, already heavily damaged from the attack on the Kilrathi fleet, gives the order to slow the ship down and draw in the Kilrathi. Doing so will buy much needed time for the other Confederation ships to flee the system and fight another day.

To honor the TCS Yorkshire and the rallying cry she created, NinjaLA has created a fantastic piece of art. He's rendered the final moments of the Yorkshire's battle against three Kilrathi battlewagons. Yorkshire was lost in the fight, but not before taking one Kilrathi battlewagon with her and heavily damaging another.

"Take as many of the bastards with you as you can, Yorkshire," she said, her voice harsh and cold.

"Most certainly will," Yorkshire replied. "Must get back to work here. This is Yorkshire. Long live the Confederation."

The image snapped off. Strange, "Long live the Confederation." Two days ago such a line would have seemed like a bad line from a vid, now the words nearly moved him to tears.

Ninja has really outdone himself this year. Those battlewagons look great! 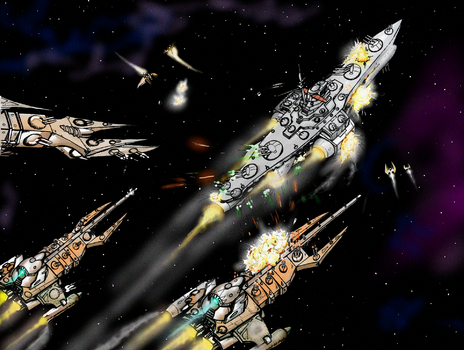