At some point during the development of Wing Commander 2, someone at Origin ran a text file of all the game's ship stats through a dot matrix printer. From there they marked changes as the game was finished--what ships were cut, what changed roles and so on. Over the years that printout yellowed, the text faded, the edges tore and it slowly disappeared... until it was discovered and photographed for this post!

The Wing Commander 2 ship codex, available here (PDF), is the archeology world's most important look at the development of Wing Commander 2's ships. Here are just a few of the amazing facts it has revealed: 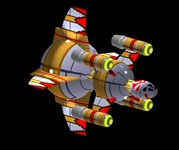