Paul Steed, an Origin artist who would later go on to fame working on the Quake games, once pitched Origin a science fiction game called Cyclone Alley. Paul explains:

Back in ’94, I was Project Director at Origin, and they knew I was going to quit and they said, ‘look, what’s it going to take to keep you here?’ And I said, ‘get me my own project, and I’ll stay. I want a team of people to do a project like I think it should be done.’ And they go, ‘okay.’ So they gave me a bunch of guys. So basically I sat down, and I closed the door to my office and I go, alright, I’m going to write down all the things off the top of my head that I like: I like motorcycles; I like rock and roll; I like women; I like violence; I like science fiction. So I took all that and rolled it into this game I called Cyclone Alley. Which basically was a racing game like Road Rash, except you’re on these Hover Bikes and you can do 360 loops inside these tubes and you’re in this space station in outer space. That was the general premise. It’s a good storyline where you’re this hero. One of the stories was, you were racing and you’re doing really good, and the whole time you get these emails or voice mails, which is how the game system runs, and some of them are cutscenes, and one of them was your girlfriend saying, “hey meet me here.” Lo and behold you finish the race and you get to this place and she’s been kidnapped and these guys are pressuring you to race for them, or throw some races or fix some races or whatever. They’re mafia in space. So that was Guido. Guido kidnaps Tanya, and if you win the race, well there was a whole intricate story. What I wanted to convey was Guido was just this sleazy guy and you need to save her.

Cyclon Alley was not a Wing Commander game... initially! Warren Spector liked the concept and pitched the idea that it could be mated with Privateer to create Privateer 2: Cyclone Alley. His pitch (and some sketches from Paul Steed's version) are below: 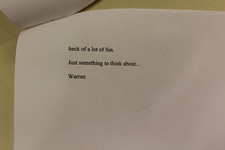