It's no secret that Chris Roberts' Strike Commander had something of a pained development cycle. Advertising promoting a Christmas 1991 release date (below) was so inaccurate that the final game's manual included a parody promising it would finally be out in 2011. One interesting fact is that Strike actually had a much more diverse selection of vehicles in the original proposal, including an attack helicopter and a P-38 Lightning which mercenaries of the future were somehow going to use as a ground attack aircraft!

As evidence of that, we've archived both versions of Origin's press release for the game. They're very interesting not only because of the changes (and the original line art!) but also because of all the detail they go into about the team and Chris Roberts' vision for the game. I can't really imagine a company today sending out bios of everyone working on a new title. 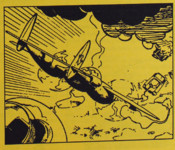