LOAF recently found a nifty marketing prerelease snap of the Wing Commander 4 box. As the story goes, the stark geometric pattern of the main box eventually gave way to a slipcase sleeve with a more action-oriented center. You can see in the shot below that this bears a fairly strong resemblance to the final design. The core art and even font are in place, but the lettering was repositioned a bunch before production. Note that it just says "Wing IV" on the side though! 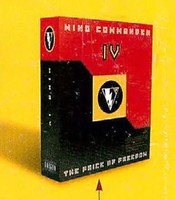