Deckard of the Ultima Codex spotted a cool vintage Wing Commander 3 preview from the August 1994 issue of PC Games Plus. It offers up tantalizing info on features such as the "stunning 640x480x256 SVGA view," fly-through capships and atmospheric missions. As this went to print about half a year before the game itself was released, it also refers to the game shipping on just two CD-ROMs. The issue also includes a review of Origin's Wings of Glory game and mentions of the upcoming Wing Commander Armada multiplayer game. Finally, there's a cute write-up from the magazine's editor on how their new email system will enable them to interact with readers over the internet! 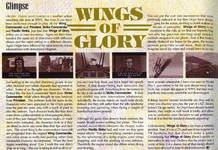 Wing Commander III is certainly the biggest project ever undertaken in the computer gaming industry. In order to accomodate the video footage, it is being shipped on 2 CD-ROMs (no floppy version). Sales projections have set their sights on numbers well past platinum level just to break even from the game's US$3,000,000 budget.

WC3 shows a lot of promise - the new flight engine looks great, and the storyline has a degree of flexibility very rarely seen in today's "interactive movies." If Origin can pull this one off, action and non-action fans alike will be storming the doors of software stores everywhere this November.