Red Baron has found another weapon used in both Wing Commander and another science fiction universe. This time it's an actual firearm configured in the same manner, rather than a reused prop, that shows up in both Prophecy and Star Trek First Contact. The Baron has pointed out some of the similarities and differences that make the design distinctive and snapped two shots of the gun in use. It's always intriguing to see things like this used in multiple series. You can find some older WC4 / Enterprise crossovers here. 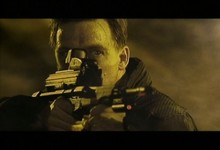 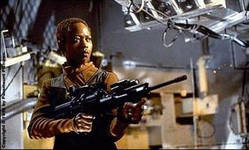 However, thanks to the hi-res DVD cutscenes, I could see that the Prophecy gun has its foregrip mounted backwards (movie armourers enjoy doing stuff like that), plus it doesn't even appear to have a Calico scopemount (like you see it in First Contact). Instead, it looks like the Bushnell sight is attached directly to the magazine for whatever reason.

Also, the Wing Commander: Prophecy armourer was Terence Morgan, and I couldn't find any Star Trek references in his portfolio.