1UP Celebrates Celebrities of '90s Games

1UP has posted a feature story about famous Hollywood actors that starred in video games of the 1990s. The article starts out by noting the Wing Commander series' heavy potential contribution to this list, but in an interesting twist, they skip past the Mark Hamill, Tom Wilson & Malcolm McDowell trifecta and instead acknowledge the all-star cast of Privateer 2: The Darkening. Check out the full article here (they're right.. we could have written a longer piece on just the actors of various Wing Commander games).

In all honesty, this list could've been populated purely by installments of Wing Commander, but for the sake of our collective sanity, I've pared it down to arguably the most star-studded entry in the series. 1996's Privateer 2: The Darkening starred a fresh Clive Owen long before his fortune turned around with roles in Sin City and Children of Men. It also featured the talents of fabled thespian John Hurt, who won an Oscar for his work in The Elephant Man as well as the my personal award for Best Cinematic Death in Alien. While his role as a deranged bartender may have been slightly below his pay grade, you can't help but notice how much fun he was having the whole time. But throughout the years, Privateer 2 has become synonymous with one name in general. Christopher Walken lends his strangely hypnotic talents to the game, and in typical Walken fashion, seems very confused with his presence in the universe. Walken is one of those actors who's such an iconic figure, that his mere presence in a role pulls the audience out of the experience and causes them to focus on the strange and unnatural world that is his life. 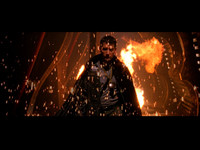 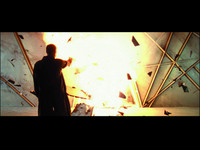