This Milk Run Just Got A Little More Interesting 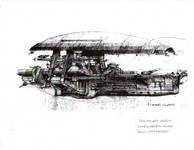 My personal feeling on the Wing Commander film are closely tied to my online history with the fan community. I first started interacting with other fans and reading news of an impending Wing Commander film online in the lead-up to Prophecy. Wing Commander: Home Sector - The Predecessor of WCNews had all kinds of cool news and rumors about the film. I remember being so excited that this movie was going to be made by Chris Roberts himself.

My reactions to the film itself were tempered by the fact that I had to wait for at least a month or more before my local Theater would play the movie. By that time I had heard all the complaints, and there was so much talk about how much better the novel was and how they had cut out all the traitor subplots and whatnot. When I finally got to watch the film, the film itself surprised me. It wasn't really horrible, just very flawed and somewhat flat in the end half. There was quite a bit that I felt the film got right buried under a bunch of what felt wrong.

Somewhere in there, something tweaked in my brain. You could say I'm a bit obsessive at times, and I think I can honestly say that I was fascinated by how something that seemed so promising could have ended up receiving the kind of reception it did. What went wrong? For all the talk about the missing scenes, would it have made a difference? Was there a better film - maybe even a good one - on an editing room floor somewhere?

In the last 13 years we've recovered some amazing behind the scenes material that I think every Wing Commander fan whether you like the film or hate the film owes it to themselves to read. As part of the WCpedia project, we've compiled as much info as we could on the film and it's making into one place. Check it out HERE.

There you will find links to various places that offer the movie for rent via streaming in HD, as well as info on various international versions of the DVD as well as international posters, behind the scenes articles, production photos, interviews, concept art, the scripts themselves, and more. Most notably I'd like to point out the shooting script which I've color coded so that you can easily tell what material either didn't make it into the final cut or that was moved or changed somehow in the editing process. You can find it HERE.