Chirichan Shuttle Goes Back to the Future

Here's another fun model for Privateer 2 fans. The 28th Century Tri-System Chirichan Shuttle has been reimagined to look more like a conventional 27th Century Terran design. I definitely prefer ScoobyDoo's blue highlights over durasteel to the yellow and green tint. 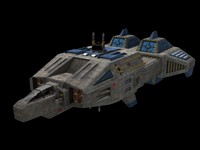 You can add the P2 SH2A Shuttle, christened as "Aries" to the list.

The primary combat platform of the Chirichan pirate clan. SH2As are used for every type of operation: from average patrol, ordinary commerce and smuggling to direct attacks on Jincilla and military targets. The CIS maintains a SH2A, which it uses for covert operations.