Malcolm Reynolds has posted new pictures with the latest on his cardboard Tiger's Claw model. All of the major body pieces are now together, and the conning tower has been added. Side docking bay ports also beef up the mid section. This leaves only secondary structures and finishing touches to go before the ship is complete! Malcolm is looking for suggestions on how to shape some of the finger details, so please post your feedback to the CIC Forum via the Discuss link below. 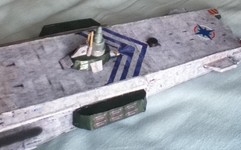 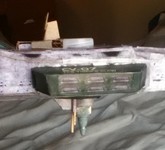 I've finally got back to work on the old girl. In these pics you can see some work I've done on the conning tower as well as the side hangar bay/launch tube things.

I have added some green coloring to the side of the ship, a couple of launch tubes and on one side of the Claw, another nameplate. Should I put the nameplate on both sides or does it look good on just one?

Here is where my design begins to deviate a bit more from Howard Day's original render, though hopefully not too much. I have mostly completed work on the conning tower on the underbelly of the Claw which is quite different from Howard's. Now I am working on building the upper conning tower, which is proving to be far more difficult than I had originally thought. I really like Howard's conning tower, and want to make mine as close to his as possible.