WC vs History: I'll have the Samar with an order of Surigao on the side...

Morale in the Third Fleet was high after the rough handling the Americans had given the Japanese Center Force. Admiral Kurita had briefly turned his mighty surface around in the Sibuyan Sea, however by early evening Kurita had turned around and was once again heading for the San Bernardino Strait. The Center Force now consisted of: the world’s largest battleship and sister to the lost Musashi, Yamato, the battleships Nagato, Kongo and Haruna, six cruisers, two light cruisers, and eleven destroyers. Through the night of October 24-25, the Center Force steamed towards the Strait. They did not go unnoticed. A “bat team” search from the USS Independence had spotted the Center Force and alerted that it was now headed towards San Bernadino Strait. Clear actionable intelligence that was squandered or ignored, depending on your source.

Fleet Admiral William F. “Bull” Halsey, Jr. was an American hero. He had led the carriers of the Pacific Fleet in the early dark days of the Pacific War. He was the first to strike back at the Japanese with raids in the Marshall Islands. He had escorted the Hornet to launch the Doolittle Raid. He had missed Midway because of most likely stress induced eczema and never forgave himself for it. He had turned around the American situation at Guadalcanal and then led US forces to victory in the Solomons before transferring to Fleet command once again. The Third Fleet was the US Pacific Fleet when Halsey was in command. The very same ships, planes and crew, when Admiral Raymond A. Spurance was in command was known as the Fifth Fleet. The two admirals rotated time between planning and executing operations and when they traded roles the fleet change designations. This had the effect of confusing the Japanese into believing there were actually two large American fleets roaming the waters of the Pacific. Halsey, again, missed the great carrier battle at the Philippine Sea when he was planning for operations farther west. He took command in the Fall of 1944 and steamed the Third Fleet into battle of Formosa. The stunning success of the raids there and against the Philippines provided intelligence that was quickly acted upon by the American command. The Philippines were barely defended. This caused the invasion to be moved up to late October and now put Halsey in the situation he was in on early evening 24 October. Fleet Admiral William F. “Bull” Halsey, Jr. was an American hero, who made a series of monumental mistakes.

The actions of the Third Fleet on the evening of 24 October, whose responsibility was split as a result of the lack of ships sunk during the Philippine Sea between protecting the invasion and if possible to destroy the enemy fleet, were unclear to those that it mattered to because of a split chain of command and because of implied intent and executed actions. The most notable problem, of all those that contributed to the following events, was that Halsey failed to guard San Bernardino Strait. He did not detach Admiral Lee’s battleline formed in Task Force 34 along with a carrier group for cover, and then continue with three of his other carrier task forces after Admiral Ozawa’s Northern Force and its carriers. Despite the intelligence from the search plane from the Independence of the turning of the Center Force and that the navigation lights in the Strait were on, and a general feeling that permeated the command staffs of Admiral Mitcher’s Task Force 38, notably Admiral Arleigh “31-Knot” Burke, and other task forces that TF 34 should be formed and detached to guard the Strait, Halsey nor his staff acted. They received the intelligence but reportedly replied “Yes, yes we have that information.” Not a single ship was left to guard this all important passage. Instead Admiral Halsey and the carriers and battleships of the Third Fleet went off on a wild goose chase after carriers that served no other purpose than as bait for Halsey’s aggressive nature.

The Battle off Samar

Admiral Takeo Kurita had told his assembled commanders before they left for their mission off Leyte Gulf, “You must remember that there are such things as miracles. What man can say that there is no chance for our fleet to turn the tide of war in a decisive battle?” He seemed to be right about the miracles part, just not for the Imperial Navy. Although Kurita wouldn’t know for several hours, because as far as he was concerned the sight before his eyes in the wee hours of 25 October was miracle, there were no American ships waiting at the exit of the strait. The Center Force set course for Leyte Gulf.

The Night Battle of Surigao Strait

While Admiral Kurita made his way through San Bernardino Strait, Admiral Shoji Nishimura, Commander of the Japanese “Southern Force”, was steaming into the Surigao Strait and his own meeting with American naval forces. The Southern Force was to be the other part of the pincer created by the Center and Southern Forces meeting in Leyte Gulf. Comprised of Japan’s older battleships Fuso and Yamashiro, the veteran cruiser Mogami and four destroyers, the Southern Force was far less powerful than the battle line Admiral Jesse Oldendorf had assembled at the northern exit of the strait. The Battle of Surigao Strait was to be the last time big gunned battleships exchanged broadsides. Ironically it was the older battleships of both navies, including five battleships “sunk” at Pearl Harbor in 1941 that were the last to exchange gunfire and not the modern Yamato and Iowa class ships. The chance for that encounter to occur was denied by the absence of Task Force 34. It was also the last time that a naval force “crossed the T” of its opponent’s force. It resulted in a slaughter of the Japanese forces at the hands of American torpedoes capped with naval rifle fire. The last salvo of the last battleship action was fired by USS Mississippi, the only one of Oldendorf’s battleships that was not at Pearl Harbor on December 7th.

The ships of Taffy 3 were never intended to fight a major surface action. Escort Carriers were designated CVEs by the Navy. Sailors gave the class nicknames like “Cheap Vulnerable Expendable”, “Kaiser Coffins”, “Jeep Carriers”, “baby flattops”, and others. They were merchant hulls redesigned to carry small air groups that were used for anti-submarine patrol and supporting amphibious operations with close air support. Six escort carriers formed the core of Taffy 3. They were escorted by three destroyers and four destroyer escorts. 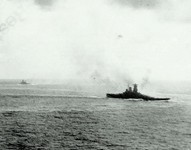 The Fletcher class destroyers USS Johnston (DD-557), USS Hoel (DD-533), and USS Heermann (DD-352), and the destroyer escort USS Samuel B. Roberts (DE-413) engaged the vastly superior Center Force for two hours on the morning of 25 October 1944. The Japanese force was sighted by an anti-submarine patrol at 0637. Upon hearing the report Admiral Sprague demanded confirmation the pilot, Ensign William C. Brooks, were not looking at a part of Third Fleet. Brooks descended on the battleship Yamato and radioed back: “I can see pagoda masts. I see the biggest meatball flag on the biggest battleship I ever saw!" Brooks wasn’t kidding. The battleship Yamato, fully loaded for combat, was more tonnage than the combined tonnage of every ship in Taffy 3. A beehive of activity began within Taffy 3. All ships began making smoke to conceal the ships to the Japanese gunners. 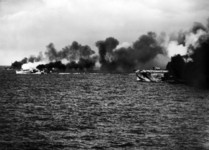 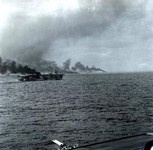 Taffy 3 used smoke to hide themselves from Japanese gunners.

At 0700, as Japanese shell splashes began to land near the ships, Commander Ernest Evans initiated his own attack, without communicating with the other ships, by ordering flank speed towards the enemy. One has to wonder if anyone on the Johnston or any of the escort ships of Taffy 3 knew that it was the ninetieth anniversary of the Charge of the Light Brigade at Balaclava. 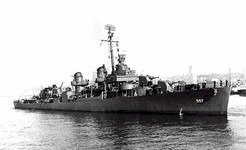 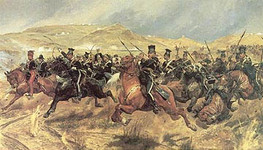 The USS Johnston, Commander Ernest E. Evans, and the Charge of the Light Brigade, all entered into history of 25 October.

The Johnston charged the Japanese line repeatedly. Her torpedoes and gunfire damaged three Japanese ships; a light cruiser, cruiser and battleship. After the ship had been ruined by gunfire, a Japanese destroyer passed the survivors and wreck. The crew of the destroyer had lined the side of the ship and gave the survivors of the Johnston a salute for the courageous battle they had just fought. The other ships of Taffy 3 charged the enemy repeatedly until their own losses or damage took them from the battle. 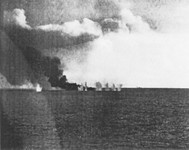 The ships of Taffy 3 and planes of Taffys 1, 2 and 3, inflicted both physical damage, three cruisers sunk, three cruisers and a destroyer damaged, and mental confusion on Admiral Kurita. He thought he was attacking a part of Admiral Halsey’s Third Fleet. His scouts reported cruisers and battleships where only destroyers steamed. Escort carriers, which one would be hard pressed to confuse with a fleet carrier, were reported as so. The almost nonstop air attacks by aircraft from three Taffys, sometimes with planes carrying weapons that had no chance of inflicting damage on surface ships, appears to have convinced Kurita of the direness of his situation. There was also a false sighting report of more American ships to the north that were to block his exit at San Bernardino. In reality, Admiral Halsey was hundreds of miles to the North, off Cape Engano (which translates to “Cape of Fools”), chasing Admiral Ozawa’s empty carriers. When Kurita turned his still potent Center Force away at 0930, Admiral Sprague reported that he heard a nearby sailor yell “Damn it boys! They’re getting away!”

The eminent naval historian, Samuel Eliot Morison, said of the Battle off Samar:

“In no engagement of its entire history has the United States Navy shown more gallantry, guts and gumption than in those two morning hours between 0730 and 0930 off Samar.”

The Battle of Surigao Strait doesn’t have a direct mention in the Wing Commander lore. The action at the end of the Wing Commander movie, when Admiral Tolwyn’s fleet destroys the Kilrathi assault on Earth as they come through the jump point, is a close approximation. The Kilrathi forces are destroyed ship by ship as they come through behind the arrival of Christopher Blair and his intelligence.

The Battle off Samar has a direct mention during the Earth Defense Campaign in the middle of the Battle of Earth. One character has a direct connection to the valiant fight that October morning. Commodore Michael Polowski, Commander, Destroyer Squadron 3, in his unnamed flagship was ordered by Admiral Tolwyn to attack the Kilrathi to keep them off balance and allow the Confederation’s carriers to survive. His squadron is destroyed save for his ship and the TCS Roger Young. As they close on the Hakaga we get the following exchange:

"Enemy carrier turning away, sir.”
"Keep on closing," Mike said calmly.
He looked over at his helm officer and smiled.
"Just like the Battle of Leyte Gulf," Mike said.
"I was thinking that," the helm replied "One of my illustrious ancestors commanded a cruiser there. We should have won that day."
Mike nodded.

From here we’ll look into who that helm officer’s “illustrious ancestor” was.