Another big first for Wing Commander III was the release of a 'Premiere Edition.' Now common, such a special edition was a big deal at the time; it was $100 and you had to call Electronic Arts to order it in person. The game came in a huge, flat cardboard pizza box that included all the normal game items plus a color version of Warbirds, a soundtrack CD, a 'Behind the Screens' CD, a t-shirt, a 1995 calendar, a VHS 'making of' tape, a folded poster and a copy of Fleet Action. The edition was also available in German, where it came with a different white t-shirt! Sam's Club also had their own version of the package, which came in an enormous Wing Commander III box! 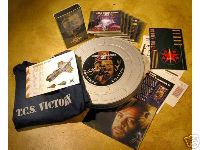