The PC version of Wing Commander III was a massive success, spawning a host of ports on that generation's new, more powerful 32-bit consoles.

PSX: The Playstation port tries to emulate the original release, with a great deal of success. Some cuts were necessary--including ground missions--but the larger size of the standard PSX discs did allow for more videos. Unfortunately, it has some difficulty running on modern iterations of the Playstation.

Macintosh: The Macintosh version is almost identical to the PC release. It was developed by Lion Entertainment in Austin, a group that worked closely with Origin.

Windows 95: The Windows 95 version of Wing Commander III was first included in 1997's The Kilrathi Saga package. The only major change in the release was a switch to digital music, which unlike the other Kilrathi Saga ports was not reorchestrated. In Japan, this version was sold separately.

At least three other ports were cancelled at some point in their development. When the game was released there was talk of doing a separate optimized version for Pentium computers. Another version, for the Sega Saturn, was announced and actually shown at a trade show but later abandoned. Finally, a version for the M2, sucessor to the 3DO, died with the console itself. 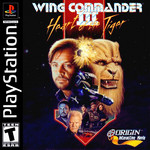